Walking the Path of Life, One Card at a Time

Lets discuss “that card” and lets start with the Coffin.

I watch friends and students all get a look when “that card” shows up in their Lenormand reading.  Everyone seems to have a “that card” which bothers them and its high time I started talking about them, one specific card one at a time, and addressing these issues. Today lets deal with the Coffin shall we? 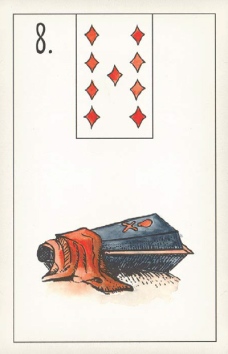 The above card is the Coffin from the Maybe Lenormand deck created by Ryan Edward and published by U.S. Games Systems Inc.

The Coffin – I have one student who sees it and immediately thinks someone is going to die, right then and there.  Okay yes a physical death can be indicated by the Coffin in Lenormand there is no doubt about it, but the number of times I have actually seen that happen, in many many readings please note and those over the course of more years then I care to admit to, I can count on one finger.  Yes just once I saw a death staring me right in the face and that’s it so lets suspend that fear for a bit while we explore the card a bit more.

The Coffin, as I read it, can mean many things, the most prevalent is that it is an ending.  Now this ending can be of the form of a job termination or a divorce when we are looking at a marriage – yikes you say?  Well some endings are for the better and sometimes divorce is a good option.  No one wants to see anyone in an abusive marriage – nuff said.

The Coffin also has a lot to do with illness, yes it is not the most positive card in the deck, you are right.  Many times, as always depending on the cards around the Coffin, it shows us this to prepare us to avoid the illness or in the worst case scenario to deal with it.

Now you want to get this Lenormand reader angry?  Read the Coffin as being transformation and see what happens to my blood pressure.  The card is not about transforming one thing into another, thats a change taking place so another card will handle that for you – lets say Stork.  Coffin is not, not, not repeat for those who think I am kidding, NOT about transformation.  Yes this is how I read but, this is how some of the best readers I have ever heard of and yes also from some of them I took  classes with, read as well.  In the event that you don’t like a card lets just agree that sugar coating it doesn’t make it better – what it does is it makes it something it isn’t and then, then you just get a poor reading.

Now as always the Coffin is always read within the context of what question you have asked is.  I have found over the course of time that how we perceive the Coffin is the issue, not the card itself and this will hold true with each card we visit as I blog some more about these cards.

Until the next time I hit the keys – Shuffle Well.